An ADHD Diagnosis – My Story At Big Orange Heart we invite others to share their stories with us. After all, we exist for YOU and for you to share stories that help with positive mental, physical, and work health. Some stories are harder to read than others, because the content may be triggering or difficult to digest. For those stories, we will display trigger warnings, and we suggest that if you are triggered by any of those things listed, that you either refrain from reading that article or seek help if anything you read does trigger something within you that could cause you self-harm or negative thoughts that you can not control.

The story presented today is about how one of our community members struggled for years with depression, suicidal thoughts, anxiety, and self-harm, and how a diagnosis of ADHD actually brought them back from a place of harm to a place of productivity and greater happiness.

Note: identifying details have been redacted. Please respect the anonymity of the author.

Six years ago, in a state of absolute desperation, I took an overdose at the age of twenty-four and ended up staying on a mental health ward for eleven weeks. I’d been struggling with my mental health for about ten years up to that point, and I saw no way out.

In May this year, one month after my thirtieth birthday, I was finally given the diagnosis that I’d spent the whole of my twenties looking for. I always knew that the anxiety and depression which had haunted my twenties had an underlying cause, but I’d failed to find the correct diagnosis up to this point.  I will now tell you my story:

join now
become a member, be part of the community

At the age of seventeen, I was halfway through completing my A-levels, and I was plagued by misery. I was struggling to accept my sexuality, I was self-harming, and my anxiety and depression were getting worse. I struggled to be productive at school, and I was falling behind with my studies. I was very impulsive, so I decided to start an online [product] subscription website which consumed a large chunk of my time. My evenings and weekends were consumed with marketing the site, and processing customers’ orders, so I fell even further behind with my studies.

By the time I left sixth form, the anxiety had become all-consuming. I rarely left the house, had no friends, and lots of spare time to fill with misery and depression. This continued for a number of years and was fragmented by various attempts at therapy and medication, which weren’t very successful for me.

Around the age of twenty, I had decided that I would teach myself how to code, and then I’d start freelancing as a web developer. Looking back, this was just an attempt to avoid getting a job working for someone else, as being in a situation which I couldn’t control absolutely terrified me. It took me a long time to teach myself, as procrastination, a lack of focus, poor self-esteem, crippling anxiety, and depression made moving forward with anything a torturous process. I had no friends, rarely left the house, and I felt like I was drowning – I hated life.

Over a number of years, the loneliness, very low productivity, depression and anxiety took its toll on me. I used to think that I was wasting my early twenties, but I didn’t understand how I could get out of the very negative spiral that had now firmly implanted itself into my life. It was around this time, at the age of twenty-four, when I attempted to end my life (as mentioned above).

After my eleven-week hospital stay, I felt like I didn’t really belong in this world, I was completely lost and had given up. The anxiety and depression were still a problem, but they were being suppressed by medication. I forced myself to start an eighteen-to-thirty social group, as I was desperate to improve my situation and just experience some happiness. I can remember my mum driving me to the first social meetup, it was at a bowling alley, and I desperately wanted her to turn the car around and take me home. I had also forced myself to join a political party, and I’d go out and campaign with them on a regular basis (initially I’d just leaflet drop local areas).  I wasn’t very productive at all with my work, so my income was very limited, and I consistently delivered work late or in an unsatisfactory state.

From the age of twenty-five, I’d started to experience less anxiety and depression, as the medication I was on had become more useful. I became more productive, started to make some friends, and I became a marginally happier person – I was still plagued by depression and anxiety, and I self-harmed frequently. Through my volunteering with the political party, I met a local member of parliament who saw some potential in me, and she offered me a part-time job in her constituency office (I was mystified, why employ useless me?). I worked as a parliamentary assistant alongside my work as a freelance web developer.  Having a very accomplished member of parliament believe in me, started to give me confidence and the anxiety and depression went a bit further away.

donate
$10 a month to help save lives

In May this year, I was deeply depressed, anxious, and self-harming was again the order of the day. I’d had another week of very poor productivity, so I googled ‘How to make myself more productive?’ I then stumbled across a question on the website quora.com about productivity. Someone had commented to suggest that the person who asked the question may have ADHD (Attention Deficit Hyperactivity Disorder), and they had left a link explaining the symptoms of ADHD. I clicked on this link, and all the symptoms applied to me, I instantly knew that the reason I’d struggled for more than ten years, was because I had undiagnosed ADHD – it was a life-changing moment for me. I rang my GP and mentioned my discovery to him, he was dismissive and said I’d have to wait 18 + months for a diagnosis on the NHS, so I decided to look for a private psychiatrist. By sheer luck, as someone had cancelled their appointment, I managed to see a private psychiatrist the next day. He diagnosed me with ADHD, and then he wrote to my GPs’ practice informing them of the diagnosis: “In my view, [author] has severe ADHD, his attention deficit is the most significant. He has significant but less prominent impulsivity and least significant hyperactivity. It seems that he has had long-term generalised anxiety and depression, although they are largely secondary to his ADHD.

A week after my ADHD diagnosis, I started to take an ADHD medication. Within an hour of taking the medication, for the first time in my life, I felt like I wasn’t juggling a dozen thoughts at the same time. I could focus on my work, and the anxiety felt like it was under a great degree of control; my mind had stopped being in a state of perpetual chaos. I’m still getting the dosage right, but I already feel like the anxiety, lack of productivity and depression which have plagued my life for so long, are now in a state of permanent retreat!

Taking part in ADHD groups on Facebook has been beneficial, I’ve learned lots from them and it’s been cathartic. The two biggest ADHD charities in the UK are https://www.adhdfoundation.org.uk/ and https://www.adhdaction.org/. Some people with ADHD, work with an ADHD coach to help them develop healthier patterns of behaviour, this is something I haven’t tried yet.

It is a behavioural disorder, which has the following symptoms:

People with ADHD are highly likely to suffer from anxiety and depression, especially if their ADHD is untreated.

A Note from Big Orange Heart

This story is about one individual who self-advocated and found both diagnosis and treatment that are working for them. We are not suggesting that if you experience the same symptoms that you have ADHD. As always, if you experience thoughts of self-harm, suicide, harm to others, or negative thoughts you can’t control, please seek help.  We have compiled a list of international helplines. We’re here for you. 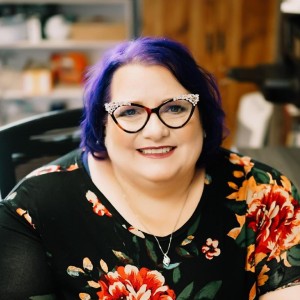 Michelle Frechette completed her MBA in Marketing, E-Commerce and Information Systems from the University of Rochester’s Simon School of Business. She has over twenty years of experience in higher education; ten years owning a web design and marketing company; and currently serves as the Head of Customer Success for Impress.org (developers of GiveWP.com and WPBusinessReviews.com). Michelle is a veteran of public speaking. She’s been an instructor for a wide variety of topics including Using Quantitative Data Analysis Software, Meditative Drawing, Intro to WordPress, and Marketing for Massage Therapy. Michelle speaks at conferences all over North America. You can find many of them recorded on WordPress.tv including “Little Things That Make a Big Difference” and “Hidden Features of WordPress Revealed,” as well as panel discussions on ethics, marketing, page builders, and women in technology. Michelle is the author “A Good Firm Handshake (and other essential business tips)” available on Amazon.com. Say hi to Michelle on Twitter at @michelleames and check out her website at worksbymichelle.com.

Michelle Frechette completed her MBA in Marketing, E-Commerce and Information Systems from the University of Rochester’s Simon School of Business. She has over twenty years of experience in higher education; ten years owning a web design and marketing company; and currently serves as the Head of Customer Success for Impress.org (developers of GiveWP.com and WPBusinessReviews.com). Michelle is a veteran of public speaking. She’s been an instructor for a wide variety of topics including Using Quantitative Data Analysis Software, Meditative Drawing, Intro to WordPress, and Marketing for Massage Therapy. Michelle speaks at conferences all over North America. You can find many of them recorded on WordPress.tv including “Little Things That Make a Big Difference” and “Hidden Features of WordPress Revealed,” as well as panel discussions on ethics, marketing, page builders, and women in technology. Michelle is the author “A Good Firm Handshake (and other essential business tips)” available on Amazon.com. Say hi to Michelle on Twitter at @michelleames and check out her website at worksbymichelle.com.